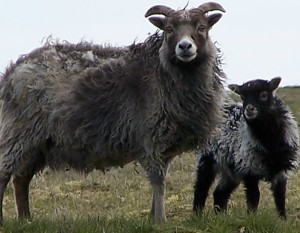 I love lambing time on the island though it is a very noisy affair with lambs and ewes constantly calling to each other.
The majority of the time, North Ronaldsay, (Rollie) ewes have very few problems during lambing. Unlike ‘soft’ commercial breeds they do not need constant vigilance during lambing as they never need assistance with the birth itself. Nature has determined that the ewes only come into season during late November so that they lamb at the optimum time; the start of the Spring in late April/early May when the grass is growing and the weather is not too cold and wet.

When a ewe is about to lamb she will go off on her own and find a secluded spot, as ewes need privacy when in labour for many reasons; the main one being that if other ewes are around who are about to give birth themselves they can get confused and think that the newborn lamb is theirs. When this happens, the ‘foster’ mother will fuss and lick the new lamb so that the lamb is confused and the real mother loses interest. This can result in the real mother rejecting her first lamb, whilst the ‘foster’ mother loses interest once she goes into labour with her own. The initial licking and nuzzling of a newborn is essential in the bonding process. The Rollie ewes tend to give birth within an hour of starting labour unlike other breeds. The ewe makes a ‘nest’ by pawing the ground, lying down and behaving restlessly.

As soon as the lamb is born, the ewe is up and licking the lamb to remove mucus from the lamb’s mouth and nose to avoid suffocation. The new mother needs to get away from the birth area as soon as possible as birds of prey are attracted to the smell of the afterbirth (placenta) and the mother must be very vigilant until the lamb is able to run fast! Once the lambs are keeping up with the flock their mothers settle the lambs into natural micro-shelter such as a dip in the ground so that they can graze while the lambs sleep.

The ewes are always keen to get back to grazing on the living seaweed, but we have to prevent them from doing so when the lambs are tiny or we would have a cacophony of distressed lamb calls as they tried to follow their mothers on the rocks and fall into rock-pools on the way!

Once the lambs are big enough they start playing their version of ‘tag’; chasing each other up little hillocks until their mothers become anxious and call them back. Ewes and lambs use both smell and sound to bond with each other although sight does play a part too. It is always funny to see lambs run straight past their newly sheared mothers because they do not ‘look right!’

Once the lambs are six weeks old, the flock is allowed back on the beach – as soon as the gate is open, the island is empty within half an hour, and the beaches are filled with lambs exploring this ‘new’ territory whilst their mothers are busily feasting on the ebb tide.