The weather may not yet be warm but at least the ground is drying up a little, so we have been digging and planting in the small areas that we use to grow flowers and vegetables around the house. 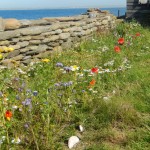 In the early days the garden had to be dug with a pickaxe as no fork let alone a spade could penetrate the earth as it was so full of limpet shells and stones, not to mention the boulders from a long distant habitation that would regularly appear!.

Each year we would get to the end and think that, ‘next year it will be better’, but mysteriously more stones would emerge and we would still have several wheelbarrow fills of small stones and shells with which to fill the holes in the tractor trail.

Eventually, however, the garden has become much easier to dig, which is a blessing as we get older and there are no young men around to help; but we still cart seaweed from the beach to fill the trenches in the vegetable patch, before covering it all over with earth again, as the earth is so productive when treated in this way.

Seaweed is here in abundance and the smellier and more maggoted the rotting weed is, the better for breaking down into ready-made beautiful soil the next year, so we fill an old boat that was washed up here a long time ago and then shovel it into the garden.

The garden is now planted and covered in a white netting that protects the seedlings from the wind and helps to keep the temperature warmer as they grow. We have had some heavy showers this week so I do not need to get out the watering cans yet, but I will be hoping to see the first shoots of the seedlings soon and then they will need a bit of nurturing  for a while.

It always amazes me how the plants grow under the net and how eventually they lift the pieces of plank that prevent the net from lifting and blowing away; sometimes as high as half a metre above the ground!

We are a long way off from having something fresh to eat from the garden- but first I must get out there and weed the strawberry patch which is choked with buttercups that imitate the strawberry plant and make it a hard task.