Auskerry Lighthouse was built between 1864 and 1866 by pioneering lighthouse engineers David and Thomas Stevenson to light the north entrance to the Stronsay Firth. Attached to the lighthouse are two flat-roofed keepers’ flats; the lower one is used all year round as a store and the other is used occasionally in the summer. 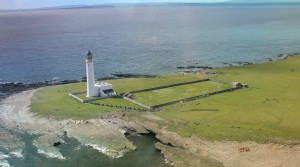 To the south of the lighthouse, near the shoreline is a crater from one of two bombs dropped on the lighthouse in 1941. The other unexploded bomb has never been found. As a result of this bombing however, the lighthouse was supplied with two anti-aircraft Hotchkiss Guns, one to the south and the other to the North of the Lighthouse buildings, to be manned by the Keepers.

Initially, the lighthouse was lived in by two families until 1940 but was then turned into a rock station where the three keepers lived upstairs until it was made automatic in July 1961.

The Lighthouse is painted entirely white except for a band of ‘Oasis’ yellow beneath the balcony, and its ‘character’ is a white light flashing every twenty seconds to light the way for passing ships.