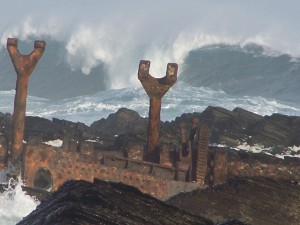 The Auskerry lighthouse is a distinctive feature on the island. Built in 1866 and standing at over 100 feet tall, it looks out across the flock and the surrounding stretches of water. Despite its imposing size and position, a number of ships have still managed to run aground on the treacherous hidden reefs below the tower. The only wreck that is still visible is the British built steam cargo ship, SS Hastings County.

It was the night of June 13th 1926 in extremely heavy fog when she ran aground on the Hunters Reef less than 1000 metres to the South East of the lighthouse. The 115-metre long, 4,147ton ship was travelling past Orkney on its way to Montreal from Hamburg on her maiden voyage after being renamed.

Officially declared lost in July 1926, the majority of her cargo including the bunker coal was salvaged and no lives were lost. Much of the cargo, which included children’s toys and baler twine, did not hold any real value. However, there were two luxury yachts onboard which are thought to have had a more nefarious intended use. America was in the midst of the controversial policy of Prohibition, which saw a ban on the manufacturing, sale and transportation of intoxicating liquors, and it is thought that the yachts were being transported across the Atlantic in order to undergo liquor-running between Canada and the USA.

It is said that local people used to sail across from the Parish of Deerness on the Orkney mainland to the site of the wreck to see if they could find anything worth salvaging and many children benefitted from the wooden bricks!

To this day, large parts of the ship are still visible including the propeller shaft, crankshaft and large parts of the boilers (see pic). However, Orkney’s harsh winter storms have scattered the majority of the wreck over a wide area at a depth of roughly 10-15 metres of water.